Yū (木綿, Yuu) is a secondary character who resides in Utakata Village. The player can find her at her desk adjacent to the village exit.

Players who participated in Famitsu's Toukiden questionnaire ranked her as their tenth favorite character.

She is Yamato's only daughter and a receptionist for the "Slayer" organization, the currently elected government created to protect whatever remains of humanity from demons in Nakatsu Kuni. She always congratulates and sends the Slayers away with a smile.

Kiwami elaborates that her constant smile is her way of cheering up the warriors and trying to cope with the desolation which surrounds her. It was a habit she kept after her mother passed away when she was younger. When she was ten years old, she voluntarily helped the Slayers staying at her home during the "Awakening". Her efforts earned Souma's sincere appreciation and protection.

Quiz Battle Toukiden protagonists accidentally peep on her in the bathing area due to Ibuki's mischievousness. After she tends to a wounded Ibuki, he/she has the chance to apologize to her for their rudeness during her formal introduction. Since his/her training is temporarily on hold, Yuu gives him/her requests from the townsfolk to fulfill and shares local gossip with him/her to encourage him/her. She informs the protagonist when his/her mentor recovers.

When her soul is being consumed by Izuchikanata, she is in hysterics for a peaceful picnic flower viewing with her father and friends.

Bubbly and cheerful Yū is a filial daughter who openly shows her affection and happily cooks her father's meals. There are many men who want to court Yū, but they are too intimidated by Yamato to try. The player can learn of the chief's softer side through her and she can translate Tenko's mewings. Yū tries her best to speak their language in private.

Higher affinity additionally increases the chances of her appearing within the village's bathing area.

The player has to check in with Yū for every mission in the game. They cannot leave the village until they have confirmed their departure with her. Once a mission has been selected, every exit from the Slayers' base is locked except for the village exit (red arrow icon). Equipment can be altered by checking the wall of weapons adjacent to her desk. Missions can be canceled if the player needs to backtrack for facilities within the village.

Yū also offers requests posted by the residents of Utakata Village. Aside from offering secondary views of the game's characters, these fetch quests or hunting challenges can boost affinity ratings with the cast, offer upgrades to the village, and/or reward items or currency. Requirements for fetch quests can be fulfilled before accepting, but hunting challenges only count once the player has accepted them. The player can take a maximum of five requests simultaneously. Completing them is highly recommended by the developers but optional.

During the game's solo story, Yū may refuse to let the player accept missions or turn in requests. This means the player must proceed with storyline first. These objectives are often directly stated by Yamato. Wander the village and search for any exclamation points if he does not provide hints. Protagonists can "go to sleep" simply by returning to their home.

Offline missions which can be accessed without co-op. The main story is concluded within five chapters. Chapters 6 and 7 are bonus hunting missions which offer demons and harder stages not seen during the main story. They have no story continuity and are ideal for collecting the game's rarer parts.

Multiplayer missions are separated by their difficulty levels and offer more stages than those seen in solo play. Players can find demons and rare items exclusive to this mode.

These requests are commissioned by miscellaneous villagers without portraits or individual names. Character specific requests are found on the character's respective pages.

All requests must be completed in consecutive order and are unlocked based on the player's progress in the main story. Complete the main story if certain requests fail to immediately appear. 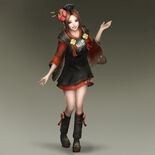 CG render
Add a photo to this gallery
Retrieved from "https://koei.fandom.com/wiki/Y%C5%AB?oldid=269378"
Community content is available under CC-BY-SA unless otherwise noted.