Yamato (大和) is a secondary character in Toukiden: The Age of Demons who resides in Utakata Village. The player can normally find him standing over the "Slayer" emblem at the center of the reception area. Kiwami alters him to be a NPC ally combatant.

Players who participated in Famitsu's Toukiden questionnaire ranked him as their ninth favorite character.

Yamato was born and raised in Utakata Village. He is Yū's father and Hatsuho's childhood friend. Yamato was the first to recognize Hatsuho when she returned home and explained the situation to her. He hesitated to introduce her to her parents, fearing their shock if they were reunited with their daughter in her current state. Before he had time to ponder, the dimensional portal which began the "Awakening" opened. Yamato fought heroically with the other Slayers but lost his eye to the demons. Hatsuho's parents also perished in the seven day conflict, causing Yamato to regret his decision to wait.

Without his good eye and his body injured, Yamato has been forced to retire from fighting. He was elected by the "Slayer" organization, the currently elected government created to protect whatever remains of humanity from demons, to be Utakata's chief. He provides shelter to any survivors, always hoping to see new recruits. He is often seen ordering the Slayers to attend to various assignments. The chief meets the Quiz Battle protagonist while on a routine patrol. He and his men carried the exhausted traveler back to Utakata. Their familiarity with Hatsuho and their ability to talk with multiple Mitama convinces him to permit their admission as a Slayer.

Feeling inept to help Hatsuho, he entrusts the protagonist to watch over her for him. He momentarily leaves the village during the story to attend to a meeting with the other chiefs at Sacred Mountain, the center of humanity's government in Nakatsu Kuni. Yamato implies that the situation for the other villages isn't well, yet he dismisses it to remain focused on Utakata.

During Kiwami's action trial, Yamato is absent due to a summons from the Slayer's headquarters. He resumes his post upon his return, implying that Utakata will soon need to deal with northern affairs. In the meantime he entrusts the new recruit with a harder set of missions, congratulating him/her once these deeds have been accomplished.

Politics play in Kuyou's favor so Yamato takes a backseat to leadership during Kiwami's narrative. He tells his comrades to obey whatever the strategist says. When the "Eclipse Demon" summons a portal within Utakata's barrier, Yamato reluctantly consents to Kuyou's order to abandon the village. He helps with the evacuation of the village but reaches his breaking point when the Slayers commence a charge to the death against the swarm. Kikka convinces him to change his mind and he escorts her to the protagonist, Ouka, and Souma. Yamato forgoes his retirement to fight on the battlefront until chapter 10.

When his soul is being consumed by Izuchikanata, he believes he is joining his daughter for a peaceful picnic flower viewing and playing with Hatsuho as his younger self. Once every other person is saved from the abyss, Yamato grants the protagonist leadership for the final battle. He entrusts his soul and Mitama partner to him/her. He may be used in the final battle against the demon.

After Izuchikanata's defeat, he entrusts the protagonist to deliver the letter sent by Mio and Miyu's father. When the sisters write what is meant to be their last publication, Yamato sends a copy to their father to show him their convictions and contributions to Utakata. He receives a reply and asks the protagonist to give it to the sisters before they leave.

Rough and strict, Yamato is a military man even when retired. He stands firm with a rigid posture, easily intimidating the young recruits. Though he seems like a hardened stoic who doesn't show his emotions, he treasures the friendship shared between the Slayers and dearly loves his daughter. He is very protective of Yū, which discourages any man from trying to court with her. His daughter reveals that he can be deceptively childish with his food and refuses to eat carrots. Kiwami adds that he is considered a slacker to the other chiefs, something which hasn't changed from his youth. He doesn't heavily enforce formalities nor expects anyone to obey them.

Despite the vast age difference between them, he still looks up to Hatsuho as his older sister. He feels conflicted patronizing her inexperience as a Slayer and is hesitant to let her fight. Yamato understands the reasons for Kuyou's attitude —neither man seeking to conform the other to their beliefs— yet criticizes his cohort's reclusive shunning tactics. He personally believes Kuyou would be happier by being honest in his interactions with others. The duo bond with bitter jest and sarcasm.

Higher affinity additionally increases the chances of him appearing within the village's bathing area. Completing the Kiwami requests with high affinity also has him present the exclusive item needed to forge a replica of his sword.

Aside from providing whatever missions or objectives the player needs for the main story, Yamato offers explanatory tutorials for the game's weapons and the Demon Eyes skill. Players can visit him to check what accomplishments/trophies they have earned. 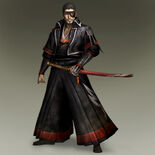 CG render
Add a photo to this gallery
Retrieved from "https://koei.fandom.com/wiki/Yamato?oldid=424948"
Community content is available under CC-BY-SA unless otherwise noted.