Yangshi (楊氏, onyomi: Yōshi), also known as Lady Yang (楊夫人, onyomi: Yōfujin), is Ma Chao's wife. Wang Yi feigned friendship with her as a ruse for her husband's infiltration. Yangshi and her child were soon killed by Yin Feng and Zhao Qu. Romance of the Three Kingdoms has her and her three children murdered by Liang Kuan and Zhao Qu. Their eviscerated bodies were shown to an enraged Ma Chao.

Yang Shi is a secret character in the eleventh Romance of the Three Kingdoms title. Like most female officers, she is more suited in handling domestic tasks and recruiting other officers. Her special ability makes it easier to produce more horses for the player's own cavalrymen.

100man-nin no Sangokushi has her appear with narrative significance in Ma Yunlu's character centric episode. Yangshi is dearly loved by her husband's family and considered a kind voice of reason. She is kidnapped during the chaos of Han Sui's betrayal and saved by Ma Yunlu. Yangshi cannot fight so she hides in a box that Ma Yunlu safely carries back to Ji Castle. She trusts Wang Yi's invite to talk after the battle and is killed off screen by her as an act of vengeance. 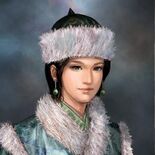 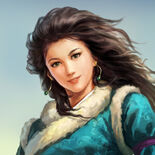 100man-nin no Sangokushi portrait
Add a photo to this gallery
Retrieved from "https://koei.fandom.com/wiki/Yangshi?oldid=311405"
Community content is available under CC-BY-SA unless otherwise noted.