Yinglong (応龍, onyomi: Ōryū) is a mythological Chinese dragon-like beast. Depending on the source, it is seen as one of the four divine beasts protecting the Yellow Emperor, a divine rain maker, or as the chief of the Four Dragons (Red Dragon, Green Dragon, White Dragon, Black Dragon). The dragon is also known to have once clashed blades with Chi You or Nuwa.

Koei's games often name the dragon in strong items, armor, or weaponry. This page seeks to include the instances when it has physically appeared in the games.

His Warriors Orochi counterpart is designed by Akihiro Yamada. He is automatically unlocked as a playable character after being spoken to once in Chapter 7 and in the fourth game through a special camp upgrade.

Yinglong was a mystic general who resided in the immortal realm. Known as the sword and shield for the other mystics, he was entrusted with exterminating the demons which roamed their home. Due to Tamamo's manipulations, he is misled into believing that his lord, the Heavenly Emperor, was the one controlling demons via a magical mirror, and that he had been tricked into carrying out a genocide campaign on innocent beings. Thinking that all things have the right to free will, he rebelled to destroy the mirror. The dark energies within it corrupted Yinglong and transformed him before he could carry out his mission, leading to the assassination of the Heavenly Emperor at the hands of the Serpent King. Fu Xi and company only learn the truth about their former companion by traveling back into the past and witnessing it for themselves. He is destroyed forever when Orochi dies. He stars in one of the game's side stages where he and his comrades quell the onslaught of Kyūbi.

In Warriors Orochi 4, when Orochi is revived through using Shuten Doji’s body as a vessel, yet split in half, with regular Orochi being revived elsewhere while Orochi X, the embodiment of the Hydra, is revived in front of Da Ji, Loki, and Odin. Yinglong’s soul is implied to still exist inside this version of Orochi, as he is seemingly more benevolent than before, helping the coalition take out his evil counterpart, before challenging them himself, possibly wanting a peaceful death, as evidenced when he gave one last smile to his former best friend Fu Xi after being slain by the latter and Susano'o.

The Harukanaru Toki no Naka de series identifies Yinglong as the combined forms of the White Dragon and Black Dragon. The parallel world is only peaceful when these two deities are unified in perfect harmony. The twin dragons are rarely seen together, since the major conflict often involves separating the dragons through some means. Priestesses tend to only see Yinglong during the ending of each game.

Though he is a stalwart warrior who has the power to cut down anything in his path, Yinglong has selective hearing. On one hand, he deeply trusts his comrades and subordinates' assessments. In the other, he stubbornly concentrates on his own beliefs and ignores any protests or rational reasoning. His sudden capriciousness sets him apart from the other mystics. Despite this, he's often sympathetic deep down and understands the pain of others who endure the chaos of the land, but his aforementioned stubborn nature causes him to feel the need to shoulder most of the responsibilities for himself rather than depend on the strength of humans. From there, he is also not afraid to speak his mind, making him come off as rather rude to others through first impressions.

Besides his camaraderie with Fu Xi, he also shares an affinity with Tamamo, Nezha's past self, and Sophitia.

Dragons, specifically twin dragons, are present in his weapons' names. His second and third weapons may be a Japanese reference to Chilong and Qinglong respectively.

"Haha! Indeed, Lord Yinglong. I suppose this is what becomes of a world without war."
"Stop calling me that! I refuse to be taken in by you anymore! I can't put up with this much longer."

"Rather than that, you would charge into the battlefield and face certain death?"
"I love all living things, and wish to protect their safety. For that, I am willing to be cut to pieces if need be."
"That is dangerous. If you die in battle, your dreams will be thwarted."
"No matter what happens to me, you will go on."
"All I am concerned with is the bigger picture. As long as the right outcome is reached in the end, I care not for anything else. You must realize your own dream."
"I intend to. But should anything happen to me... I have faith that you will do the right thing, Susano'o."
"You can beg me as often as you like, but I will not make you any promises. After all, I do not want to lose you."

: Slams both swords into the ground, creating a circular shockwave charging them with a blue aura.

: Does an uppercut with his left sword.

: EX; Does an uppercut with his right sword then drills into the empty air, finishes by charging swords with a blue aura.

: Lunges both swords upwards, then strikes horizontally. If charged, sends forth a shockwave.

: Swings both swords hard to the right then down, charging his swords with a blue aura. If charged, creates a circular shockwave while slamming the swords down.

: Slashes diagonally down from the left, right and left again. If charged, sends forth a shockwave with the last blow.

: Swings his swords diagonally from both sides, horizontally to the left, continues to strike upward with one sword, then stabs forward with another and finishes with a diagonal blow down to the right.

: Swings down with both swords from different sides.

: Yinglong slashes his sword, creating an energy wave that travels forth. Attack charges his swords with a blue aura.

R1: Slashes his swords in a cross-motion, sending forth two consecutive cutting waves in diagonal-orientation one each per slash.

, R1: Throws both swords via boomerang fashion on the ground one at a time, causing them to spin together to suck in nearby enemies through the hits and ends up charging them with a blue aura.

: Connects his swords and slashes upwards while jumping. While in mid-air, slashes down several time, with each blow emitting a shockwave. Charges the swords with a blue aura.

: Connects his swords and strikes to the right.

: Strikes to the right with both swords.

Several sources describe Yinglong as a four-winged dragon with eagle talons, deer antlers, and demonic eyes. He is also considered the ancestor of four-legged creatures according to the Huainanzi.

Once known as the Winged Dragon, Yinglong was said to have lost his wings after killing the drought-causing demon Kua Fu. Even without the ability to fly, he still had the power to conjure rain by responding to the prayers of the people who gratefully named him the Responsive Dragon. The Shanhaijing contains two versions of this story; one where Yinglong also kills the rebellious rain god Chi You and another in which Chi You escapes the dragon's wrath only to die by the hands of the drought demon.

The Chu Ci attributes King Yu's efforts to stop the Great Flood of China due to Yinglong's guidance. With the dragon showing him where to dig and irrigate, King Yu was able to end the deluge and establish the Xia Dynasty. 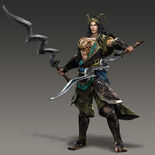