Ziya is the main protagonist in Fengshen Yanyi 2 and Mystic Heroes. He is the only character that the player can use in his debut, but he is a normal selectable character in Mystic Heroes.

A boy from common origins, Ziya is orphan who lost his parents from an early age. He was kindly raised by his grandfather, the village elder, and had his best friend, Bai Chang, as his older brother figure. Known as the trouble-maker in the village, Ziya explores the boundaries of his home without hesitation.

One day, he and Bai Chang find a cliff with a mysterious gate at its edge. Against the village elder's warnings, Ziya walk towards the structure and sees Lilan materialize before him. Saving her from the Savage Beasts that followed her, the boys escort her back to their home. However, their village is under attack by more of the same monsters and is burned to the ground in the conflict. Learning from Lilan and Taigong Wang that the gate must be closed to prevent more chaos, Ziya's grandfather gives him the task of stopping the monster invasion with the priestess. Lilan replies they should return to the gate she appeared from so they head there together. When Ziya spots Ling Ya Xian, he tries to attack the Nine Dragon member. However, his recklessness caused his friend's death and he is flung with Lilan when the gate opens with a burst of light.

Left with nothing else to do afterwards, Ziya decides to accompany Lilan in her journey. Keeping Taigong Wang's divine iron whip, he acts as the group's leader throughout the story. To protect the land's peace, he faces the Nine Dragon Sect and gains many comrades along the way. He learns the secrets of celestial realm during his travels.

Towards the end of the game, it is revealed that his father was the best friend of Hualing's father and his mother was his grandfather's daughter. In order to give birth to Ziya, the demon and human couple went to Mount Yu to make their wish a reality. He learns he is a member of the legendary clan outside of the human or celestial realm, a user of the Tao Clan. He was created with the wish to someday save the world from being overpowered by the Source of Tao. Once the Source of Tao is sealed away, the human world would forever be cut off from the celestial realm. To rescue Lilan from her fate, he decides to seal away the Source of Tao.

When his party defeats King Shou within the world's parallel dimension, Taigong Wang entrusts him with his iron whip and Ziya seals away his adversary and the Source of Tao. After he parts with his friends, Ziya returns to his reconstructed village. During the epilogue scenario, as he prays over Bai Chang's grave, he happily turns to greet a silhouette of Lilan.

Ziya returns in Mystic Heroes with Lilan. He accompanies her to the City of Ancients.

A mischievous and curious youth, Ziya starts as a young man who doesn't really consider the repercussions of his actions. He is overtly confident in his strength and confronts problems with daring bravery. Bai Chang's sacrifice haunts him and he realizes his own limitations and weaknesses. Gradually accepting his faults, he matures into a person of righteousness and moral principle. Although he doesn't always understand the mystical parts of his world, he won't allow people to abuse it for their own gain.

A generally forgiving person, he befriends people easily and shares a mutual infatuation with Lilan.

: Hops into the air whilst spinning swords.

: Throws swords as they circle around him like boomerangs. Hit foes surrounding him.

: Lunges forward while spinning like a top. Has the potential to hit six times.

: Left and right slashes followed by a back flip. Continues with diagonal slashes with each sword before twirling them at the end of the chain.

L1: Dashes. Slides across the floor at a quicker rate than normal running.
L2: Request for a party member. Automatically targets the character closest to Ziya.
R1: Defend. Pressing

after blocking a hit may trigger a small counterattack.
L2 + R2 (simultaneously): Special Combination attack if the Skill Gauge is filled. His relationship with his current party members determines who will join his assault. A Level 4 Skill Gauge grants unique Special Combinations with the character(s) who like Ziya the most; this sequence rewards yellow gems for defeated enemies.

Since Ziya is the player's character in Fengshen Yanyi 2, his defeat in normal battle means the end of the game. It may be wise to equip him with a defensive paopei for high HP or a healing paopei if the player have trouble using him. His attack and defense stats are average and passable for enduring most boss fights. While his attacks hit in a wide radius and are easy to execute, Ziya suffers from a shorter range than his party members. He has multi-hitting combos to compensate, which can be used to earn bonuses at the end of the battle. Ziya's special battle ability is increasing the earned experience and rewarded gems; this may be useful for players who are interested in level grinding.

He is needed to start any special combination techniques. The player is advised to dash across the field if they wish to keep up with the ally party's requests in time. This becomes progressively difficult to fulfill if the party is over-leveled for an area. Remember to ask for a comrade's help to boost his affinity rating with them. Don't call too frequently, however, as it may lower their friendship ratings with Ziya instead.

Aside from using special combination techniques, Ziya can also set a magical paopei at a grotto to use as attack magic. When a red beam of light surrounds Ziya, he can attack nearby foes to "mark" them. They will become walking targets for the spell the player set at the grotto. It may help dispatch monsters and bosses at a quicker rate; "Marking" is also one of the ways the player can earn blue gems.

Ziya is an overall balanced character- a bit below average in everything really, though he is notably the fastest physical attacker in Mystic Heroes. He loses a sword, but he gains various kicking attacks to create double hitting combos. They have good range and are easy to use. He can equip a variety of spells that can help the party and possesses average speed to help execute them. He is an ideal choice for beginners to the Warriors franchise.

Here are his battle statistics in Mystic Heroes. 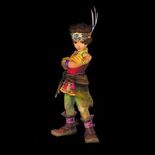 Mystic Heroes render
Add a photo to this gallery
Retrieved from "https://koei.fandom.com/wiki/Ziya?oldid=188741"
Community content is available under CC-BY-SA unless otherwise noted.